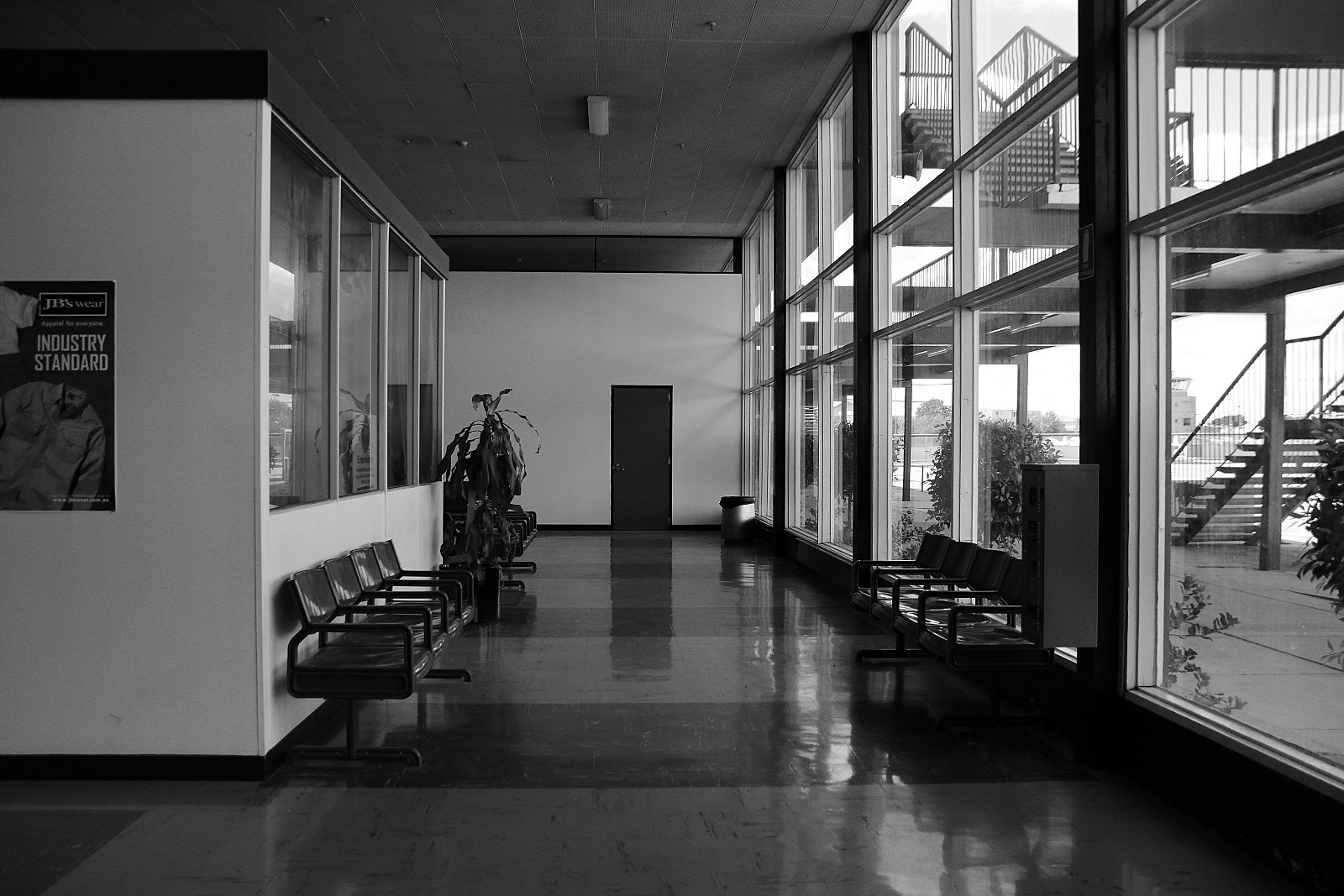 So before I fully get into this; this isn’t exactly a historical run through of the history of Essendon airport itself as such, but it’s more an example of good modern design and how we need more of it. It’s an article filled with tangents on what good design should and should not be according to me, someone admittedly without any professional design background… 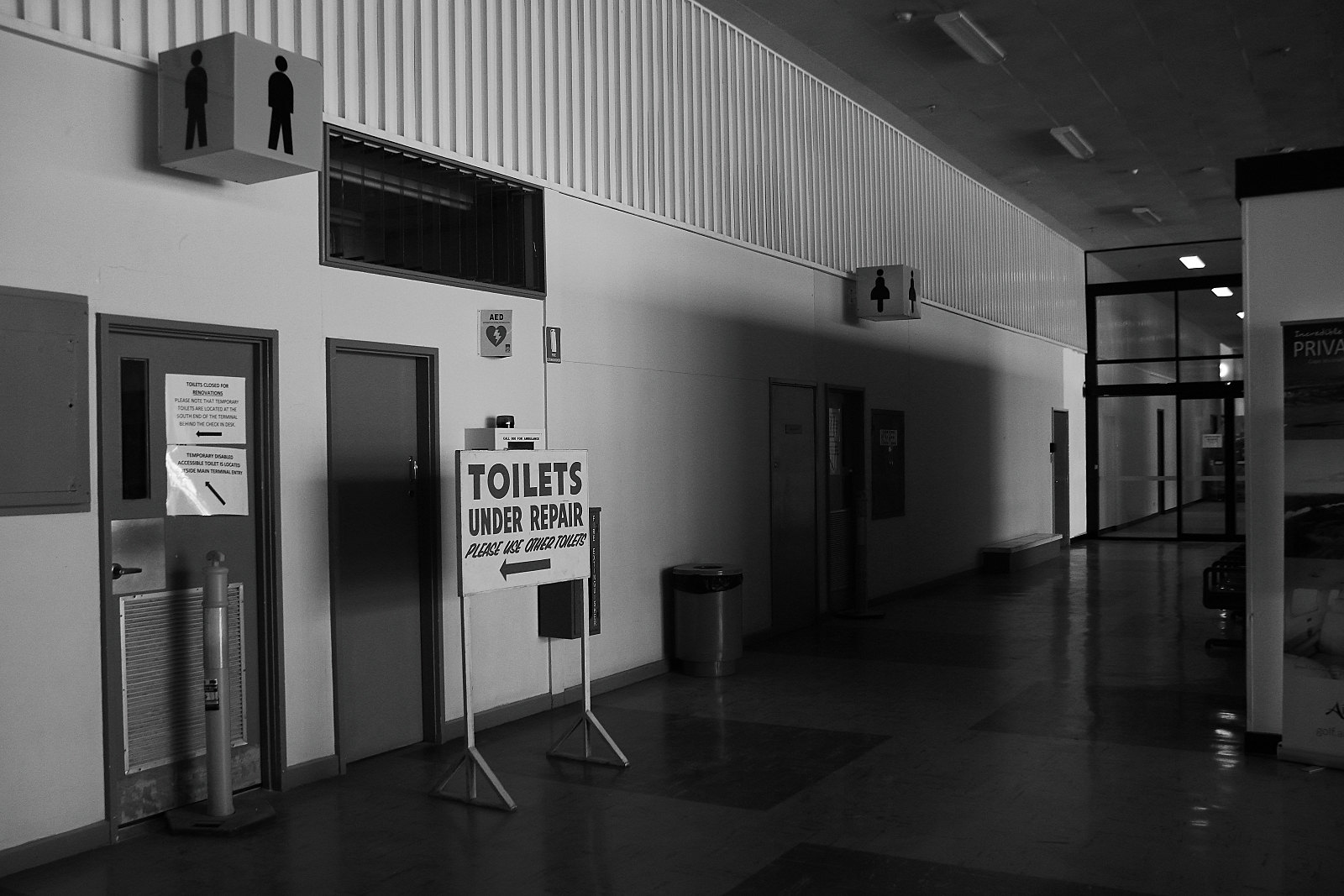 I’ve been sitting on this set of photos for a couple of months, waiting for the go ahead to post them. I was asked to wait until the new section of terminal was opened to the public and it appears that it now is, and I can tell you that in my opinion this is how all mid century (or any original) well thought out architecture should be treated, given a renovation or updating is deemed to be required. Essendon Airport’s terminal building was originally constructed in the late 1950’s/ early 60’s during the time in which Essendon was in use as Melbourne’s International Airport. The terminal building itself consisted of a large open plan passenger lounge down stairs of which the entire east facing facade was constructed out of large panes of glass with thin timber and steel framing, and looked out onto the north-south runway. A small bar/ buffet also existed at the southern entrance of the terminal. Upstairs, the eastern facing wall was also clad floor to ceiling in glass and was home to a large open plan waiting ‘hall’ and restaurant, which had a ‘modernist’ mural painted on the wall at one end. With timber lining the ceilings and carpet covering most of the floor, the restaurant probably seemed a warm change from the white canite ceiling and vinyl flooring of the lower passenger lounge. 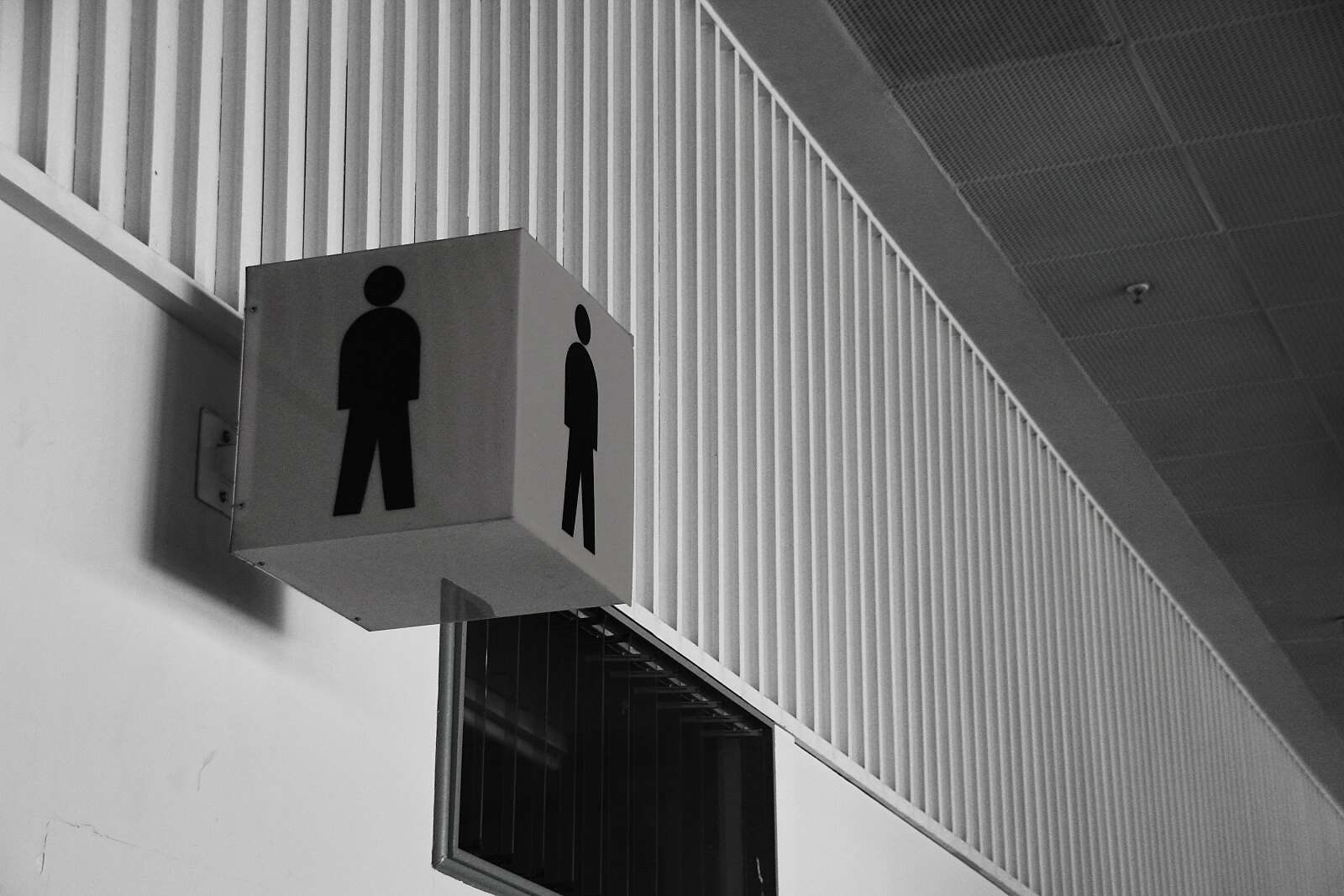 The modern renovation you see in these photos is housed within the northern end of the downstairs passenger lounge, with the northern and southern sections which were originally one large open plan lounge now divided by offices, although these are installed without any destruction of the original building. These offices line a large section of the eastern facing glass wall, however they are situated within their own ‘free standing building’ which sits below and is not attached to the original ceiling. They also maintain the original glass wall on their eastern side. All the pre-existing steel beams which help with the structural integrity of the original main open section are visible above the ceiling of the aforementioned offices within a small half metre or so gap separating the 1950’s internal ceiling from the newer, lower divided rooms. 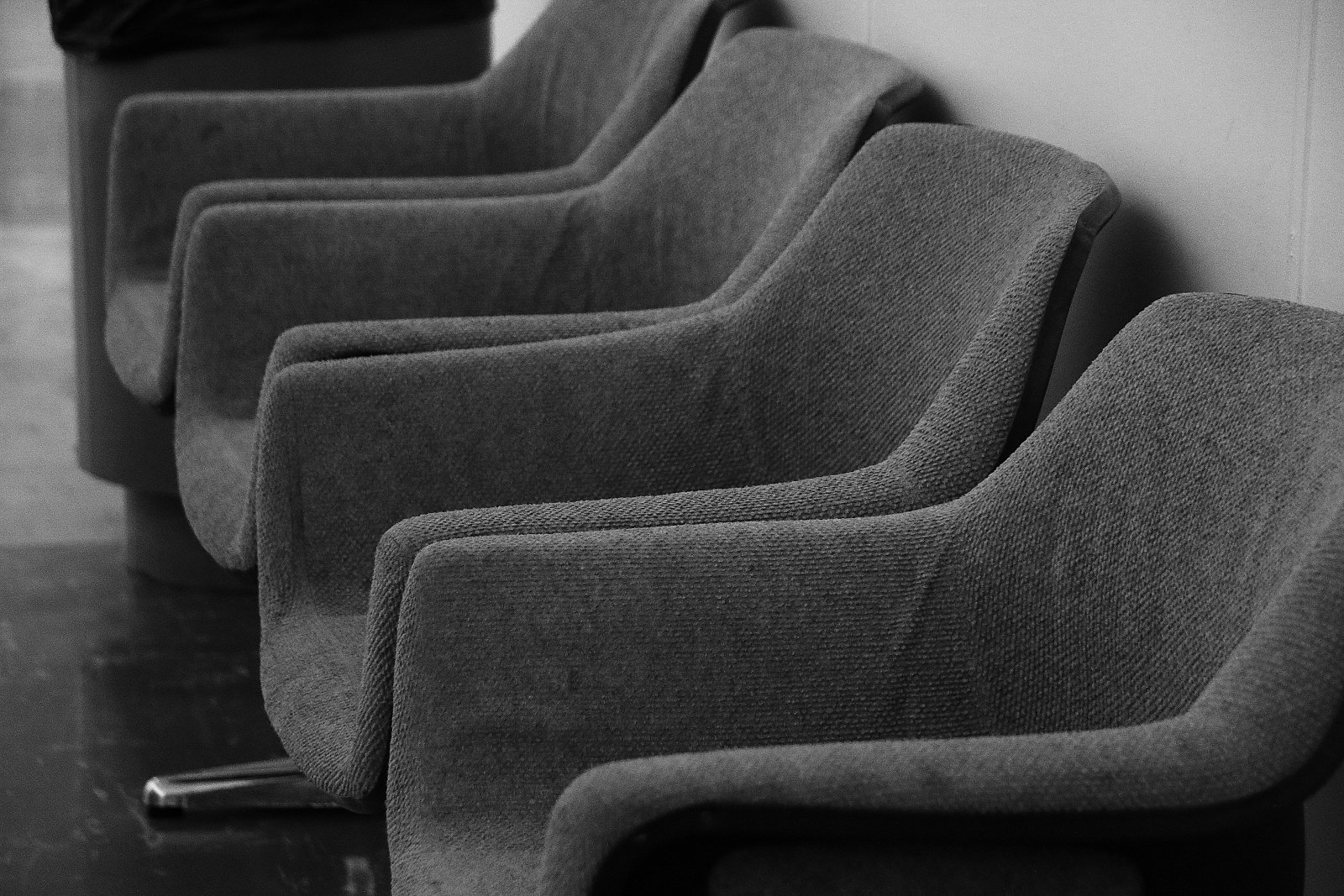 The new section is absolutely in keeping with the original open plan design, and in no way takes away from, or devalues the building’s historical aspects, but moreso adds value if anything. This is not only testimate to the architects in retaining these features but also to the heritage officer’s in charge for applying such controls to the building’s internals. The new modern interiors are mostly all made up of marble look or stone for benchtops, and lined timber for wall panelling of which was a popular mid century design que and not to mention the airport’s original restaurant. New baggage conveyer’s are all of polished stainless, and the new seating, including the individual stools, chairs, benches and tables are all very in keeping with the mid century modern design and aesthetic.

Mid century modern architecture was always about open plan, light filled spaces which are not boring, and which are available to everyone. It didn’t have to be expensive, most modern designers of the time wanted good design to be accessible, and with public buildings, good design was available for anyone to enjoy or feel comfort within. Over time, much like it has in recent years, design had become a boring, mundane, and a throw it up, move on to the next one mentality. You only have to look at most modern housing estates to realise that this is still unfortunately the case for the most part. None of those homes are pretty, none are well built, and none are in good taste. 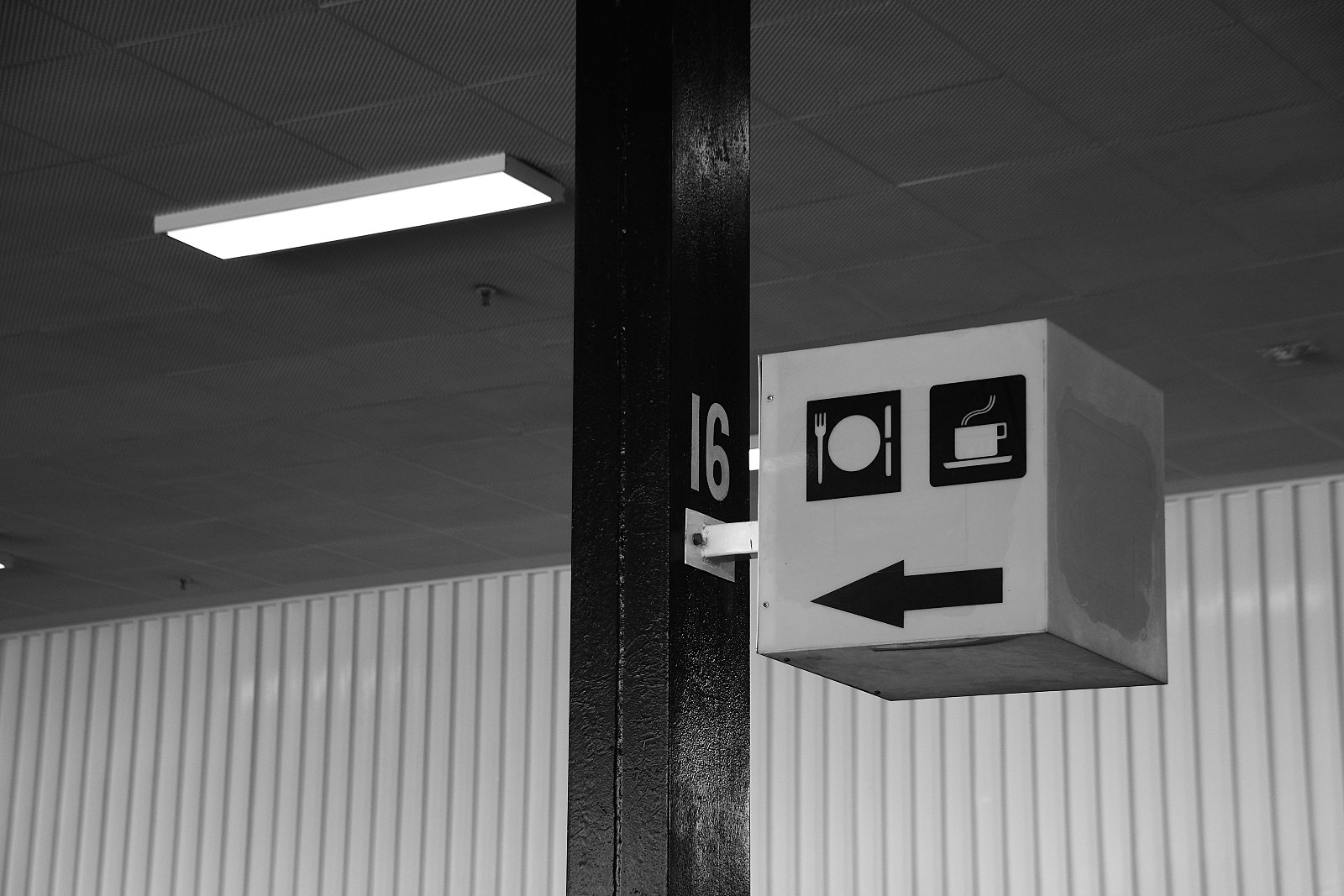 Speaking from personal experience, for a short time I worked for a construction company which built houses for a popular home provider. Now, I have no trade or legitimate design background and in such I was just a driver, but in my time working at that company I saw how genuinely bad today’s throw them up mentality has become. 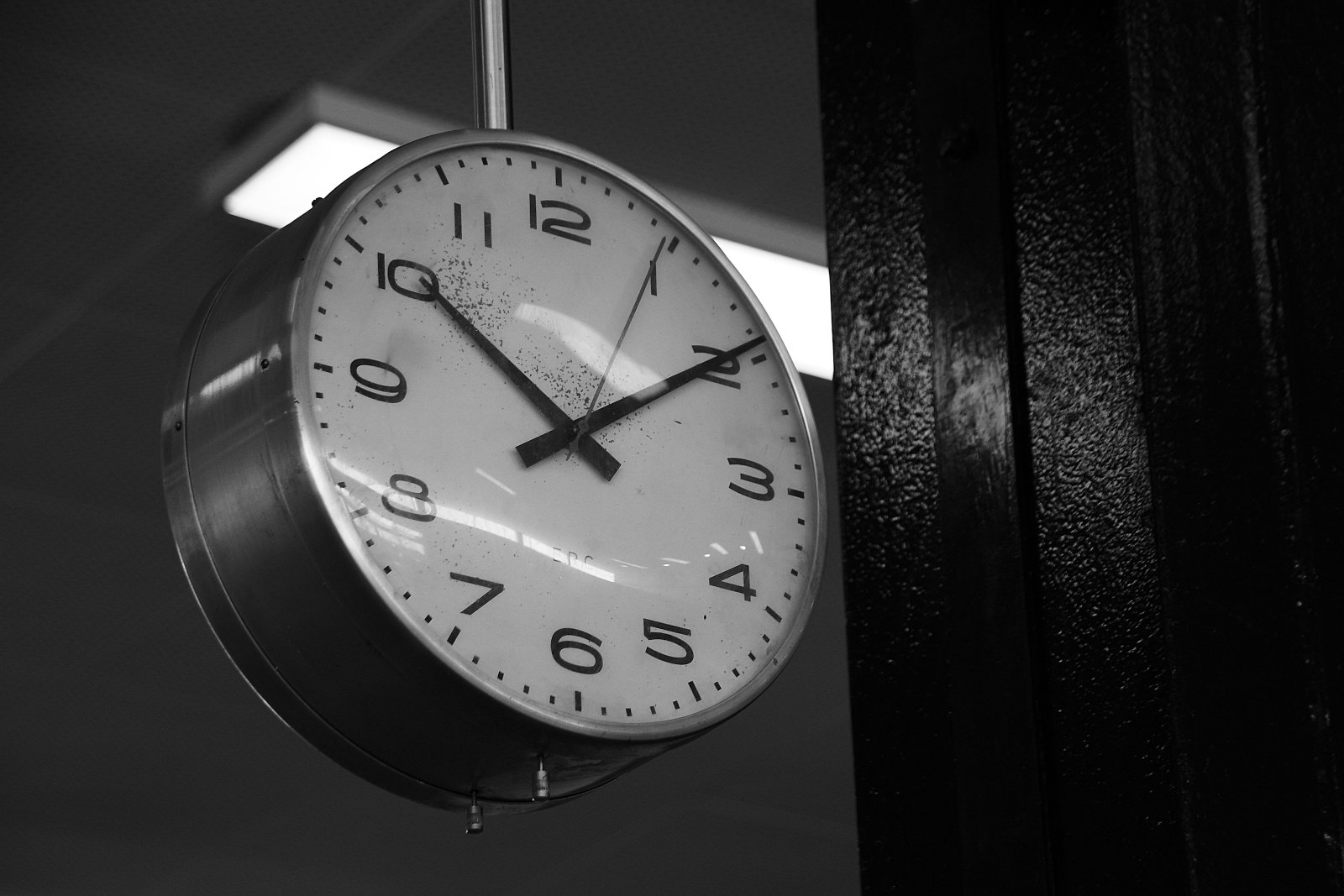 That’s not to say that there aren’t many companies, even locally which genuinely care about good architecture and about creating something which is apart of the landscape and which is conscious of its surroundings. There’s even a building company in my local small country town which emphasises on this. Although the sad part is, that this isn’t true of the overwhelming ‘cookie cutter’ majority. In example, I had seen completely finished, plastered houses with water pouring inside, literally through the finished plaster during a downpour, and all it got was a ‘patch it and paint over it’ response… and don’t even get me started on the wasted materials which ended up in landfill. So, apart from me just having enough of working there, I didn’t want to be a part of that problem, it was against everything I stand for when it comes to well planned, well thought out design and the environmental sustainability within design. 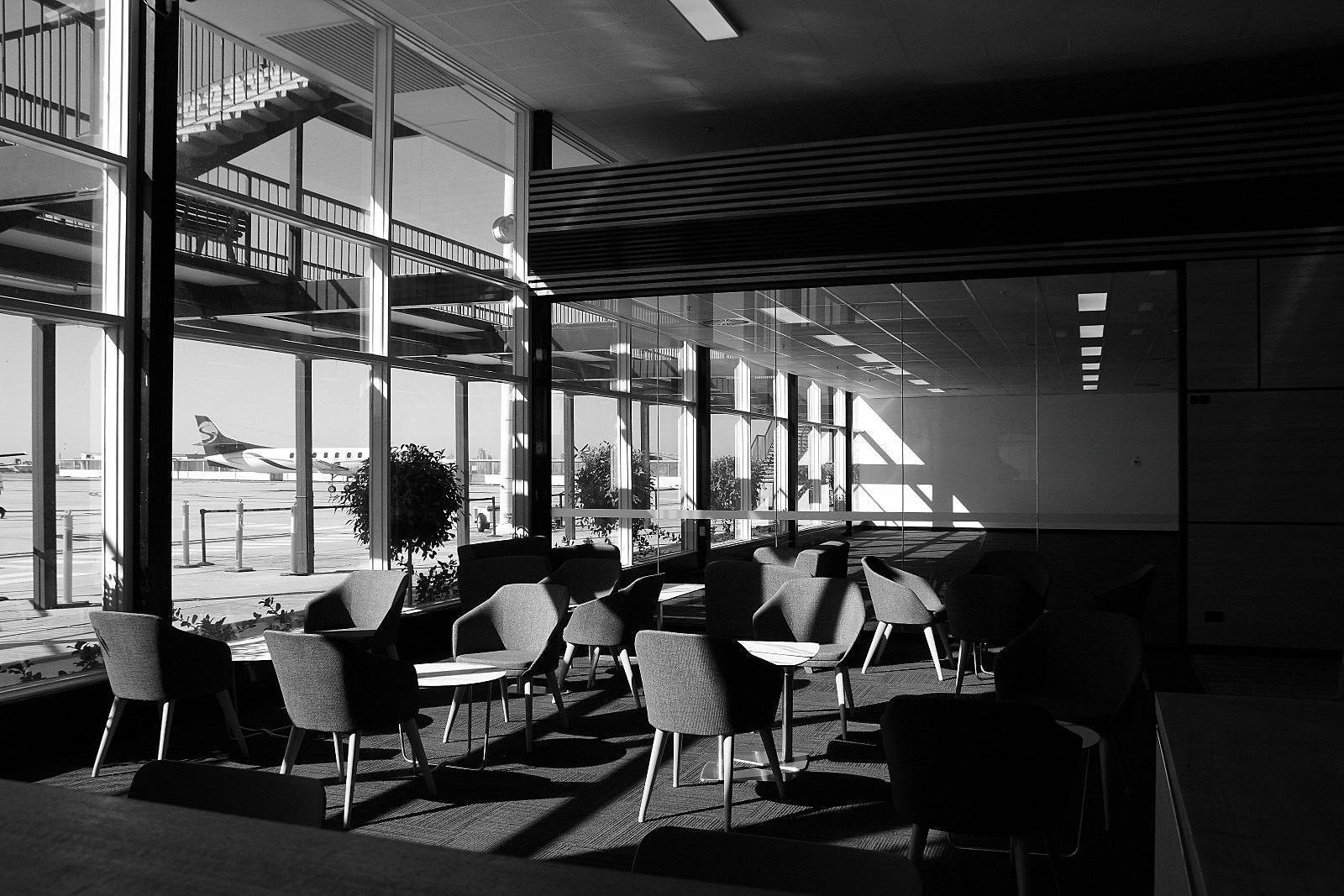 I’m fully aware that in some aspects good design costs money these days, and people aren’t willing to put in the time to make something quality unless 1. $$ are involved or 2. they genuinely care about the finished product, of which of course all true architects do. But with good design comes much thought and planning and that costs people time and so for that time they charge money, this is acceptable. However, that said, good design should be accessible, it’s us at the end of the day who are in charge of what our suburbs and towns look like. Do we really want to continue with the endless terracotta rooftops visible across our current new tree-less suburbs that sit atop the houses of which each third one is just the same layout as the previous, but with a different façade. Of which that facade is just the same as every fourth house, just a different colour, all wrapped up in a ‘lifestyle’ estate with a stupid motivational name. I really don’t think so.

Part of the problem is, is that modern home companies try to sell you the perfect life, not the perfect home. That’s why in display homes, there’s always the boys room and the girls room and the games room and the fucking home theatre, soon there’ll probably be the vegan friendly food preparation room or some shit haha… I think we need to stop building such obnoxious properties on what are obviously too small a blocks, with roofs overlapping roofs of neighbours we don’t talk to anymore and get back to the simplicity of good, well thought out design. This is something that should also apply to commercial buildings.

Commercial buildings are definitely as guilty of bad design, and we as a nation seemingly just tolerate and accept this. Maybe in the 80’s or 90’s this was more acceptable, at least in majority and maybe some things there haven’t changed. Take most local shopping centres which are dotted across these new estates for example; boring, cold and emotionless, with hints of ‘design’ or ‘art’ dotted around them, that appear to have been created by local high school kids in design class, but usually these hints of ‘art’ are no better than a ‘live, laugh, love’ plaque on a wall to be honest.

Some of these mundane interiors in quite a lot of cases actually started out as something more unique, usually what appear as 90’s or 00’s offices or commercial buildings, are unfortunately quite often housed within what would have originally been well thought out modernist spaces. Walls of glass and flooding light, modern open interior fit outs, unique designer lighting, seating, and benches, that sometimes some of which were even designed specifically just to complement that one building alone. That was until they received a 90’s/early 00’s makeover; painting or covering most of the windows, installation of artificial florescent lighting and strangely silky grey carpet, replacing original wall panelling with crappy plaster and the like, all in an effort to ‘modernise’ or ‘bring a place into the 21st century’ but moreso it just tricks regularly unaware people into thinking that old design is bad design and to think that the interiors within these ‘old buildings’ were always mundane. Mind you, these unaware people are the same people who will happily buy ‘fake/replica’ chairs and tables from Matt Blatt, Kmart or Aldi and believe that they’re buying into current modern trends without having any knowledge that their new ‘modern’ Acapulco or occasional chair is actually a 60 or so year old design.

All of that aside, we do need to try harder to incorporate good design into not only our buildings, homes, offices, etc., but into everything. Every item should be well designed and well thought out, and by all means avoid the replicas because they’re nothing, the only thing they are is good design but that’s ONLY because they’re a straight copy of a genuinely well designed and well thought out piece. Those copying obviously have no creative streak within them to think up their own designs, so in turn they produce a highly manufactured rip off which tarnishes the original product. 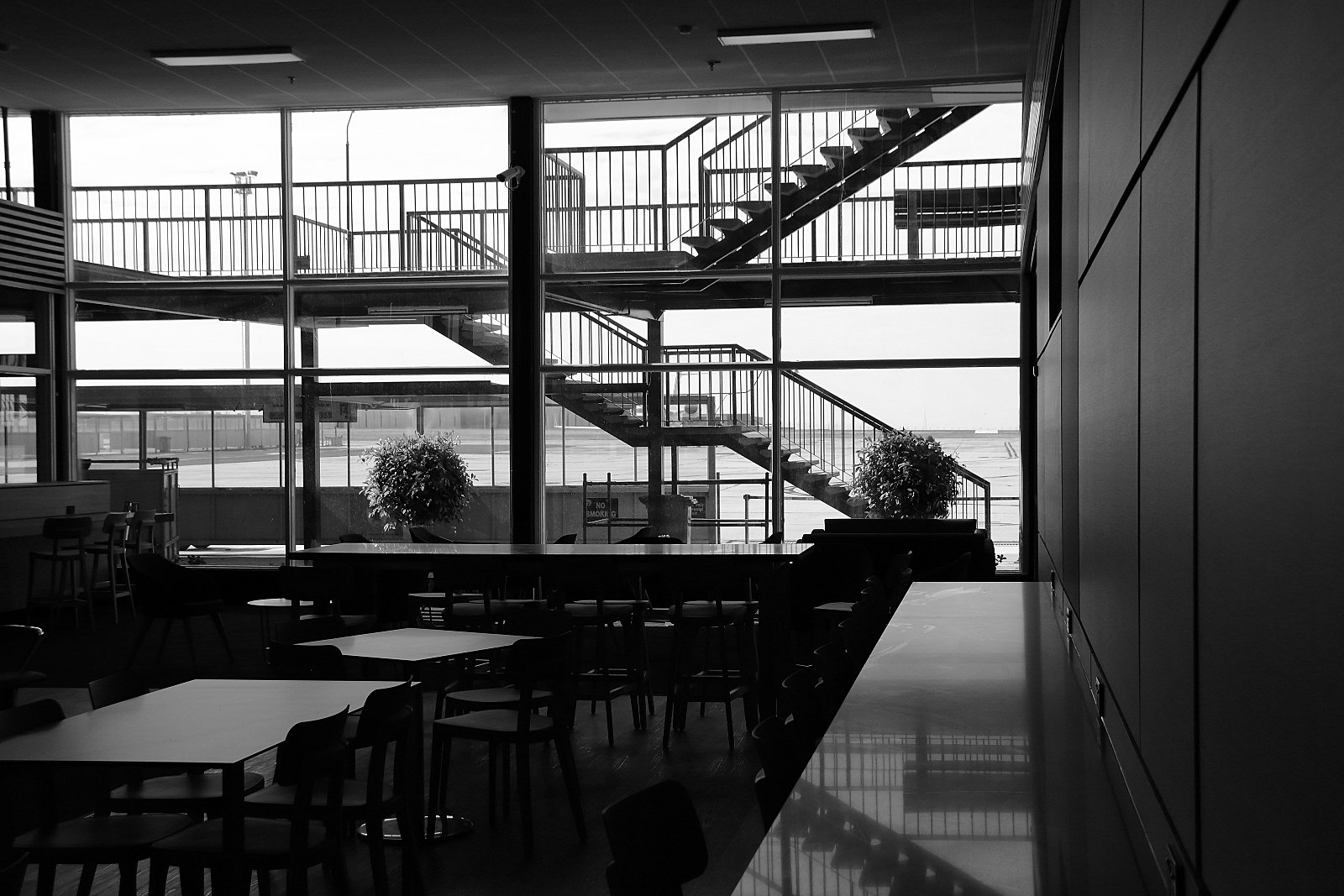 Furnishings are what can make or break a space. Chosen pieces should be well thought out as to their inclusion in said space, it’s all good and well to spend time and money on thinking about how to lay out a good design and create something open, timeless, and inviting, but all it takes is the wrong choice of lighting or soft furnishings for good building design to become tainted, this of course is easier to resolve than an overall poorly thought out space and structure. A lot of the time, a piece of furniture is more than that, and is a conversation piece or art in itself, and in such there is no need for the un-necessary clutter that is rife throughout the common display home of current times. 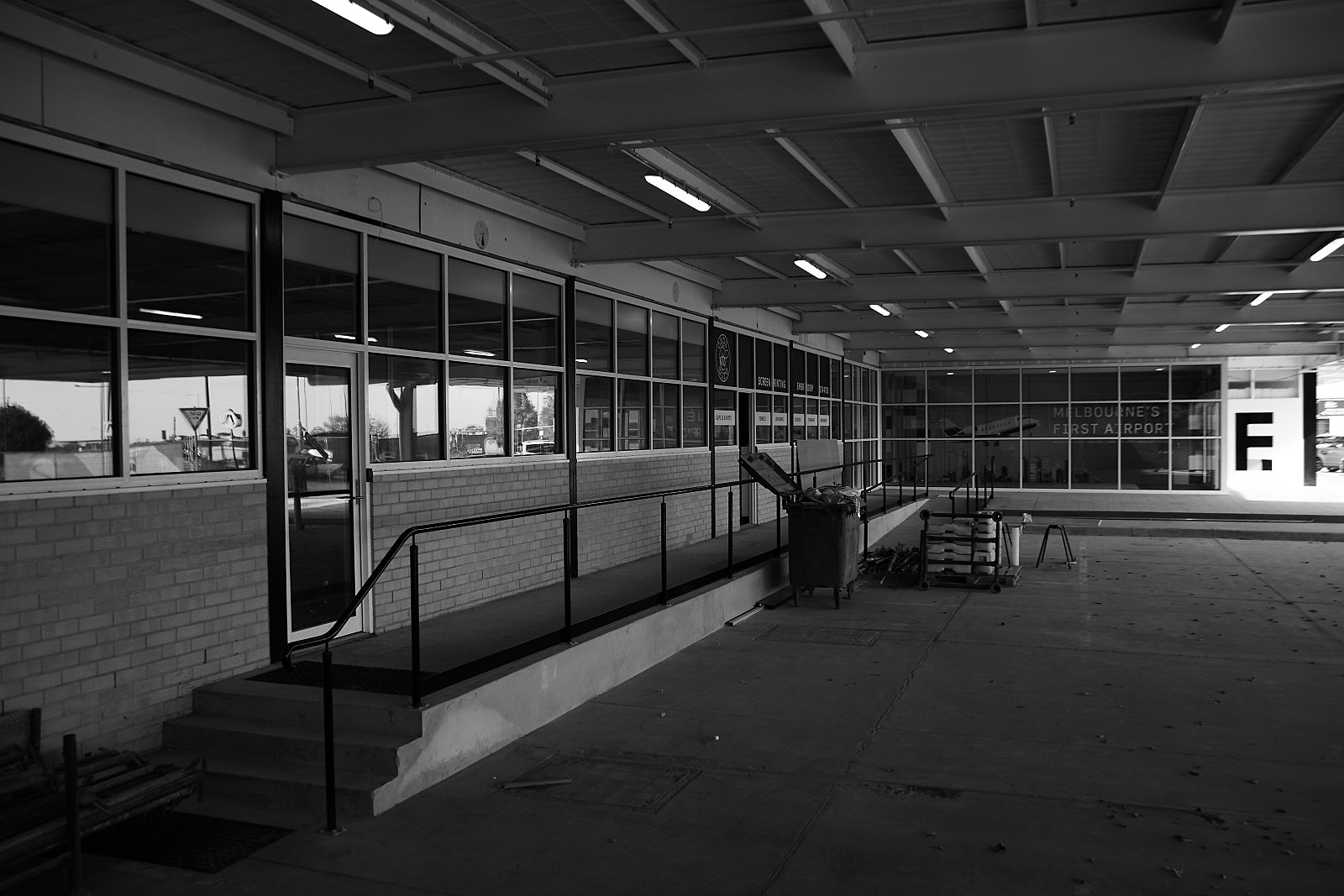 This brings me back to the remodelling of Essendon’s terminal building. The furniture is, in itself all that is needed to complement the overall remodel of the space, and especially the benches which were likely made for the remodel specifically or if not, were very well chosen. They consist of sets of four individual seats finished in black leather, all mounted on a chrome and black steel base. These alone work very well within the space and so there is no need for un-necessary clutter, although some indoor plants wouldn’t be out of place.

Several original interior components were left in situ during the remodel and these include the original signage, which was a request of the heritage council, as well as the original clock, and speakers mounted on the steel pillars supporting the building overall. The work done here stays true to the original design and is a very sympathetic ‘update’ on the original layout and design of the 1950’s building. The fact that they go so well together and the old parts of the building don’t look out of place or clash with the modern says just as much about the original designer and their ability to convey what was a modern, timeless design for the 1950s, as it does about the current architect’s ability to combine the modern with the original.

Anyway, I think I’ll leave this here for now as this is the longest piece I’ve written for some time and most likely won’t read it anyway haha.