Perception is all about how we see things; their colours, their textures, their shapes, their size, but size and scale is something that’s also relevant to the surroundings. Some objects that we consider to be small or minuet in their regular setting, might be large and dominating or even intimidating if we view the same object in an unfamiliar setting. We see things in scale relative to what we’re used to, when something or someone challenges that, it can effect the way you see things overall.

I’d seen photographs of the work of Wona Bae and Charlie Lawler, otherwise known as Loose Leaf Studio before. I was intrigued. I do remember that my first introduction to their work was a photo of a derelict petrol station, with what looked to be a large succulent of some sort growing out of where the petrol pumps once stood. I had just seen it in passing and I couldn’t remember much more about it, I didn’t even know if it was sculpture or a manipulated image at the time, let alone who created it. My first proper introduction to their work however was through artist Rone’s ‘Empire’ at Burnham Beeches, I wasn’t fortunate enough to secure a ticket to attend but I did watch the progress via Instagram and saw the contribution that Loose Leaf made to the exhibition.

It turns out that I would be fortunate enough to discover that Loose Leaf Studio would be having an exhibition of their own.

Heide Museum of Modern Art is a place I’ve been to on numerous occasions, not only because of the great exhibitions usually held there, or the monthly markets but also as a lover of mid century. Heide II, or Heide Modern as it’s now referred to is a great example of mid century modern architecture, as well as a great example of the architecture firm McGlashan Everist’s work, and it also happens to be accessible as it’s home to one of Heide MoMA’s gallery spaces. I regularly check the Heide website to see what’s on or what’s coming up and when I found out that Loose Leaf Studio were holding an exhibition there, I knew that I was going to attend when I had the chance.

I was already in Eltham this particular morning, a stones throw from Heide MoMA, it was warm but bearable, the sun was beaming high above the hills of the Yarra Valley in the distance but was yet to encroach above the buildings that surrounded me. I decided a gallery visit was in order for the remainder of the morning, but where to go? The obligatory coffee was purchased as I thought to make up my mind and Heide was chosen. I made my way back down the road out of Eltham, through Templestowe and into the grounds of Heide, I chose the southern carpark, more out of necessity than choice and ventured into the air conditioned space of the gift shop. Although other exhibitions were to be seen within this building, due to the amount of people in attendance at those, I purchased a museum ticket and made my way to the much quieter space of Heide II.

The giant leaves and bundles of reeds of which Loose Leaf Studio creates hang, drape or emerge within each space. Heide II’s built in white terrazzo benches were adorned in bundles of pale green reeds, in the same room another bundle cascades over the Mt Gambier limestone dividing wall. Further along in the sunken lounge a large ‘plant’ emerges from the opposing end; leaves seemingly reaching for the light that’s flooding the room from the single window on that side and spilling over onto the brown textured pile fabric of the couch and floor. In the former kitchen area below the sunken lounge, hung wall pieces created within a frame as well as black and white prints of previous installations and inspired photographs, including the aforementioned petrol station photograph. Wraiths of reed hung suspended from the ceiling, formed in a perfect row within the ground floor dining, and poking out from the laundry at the other end of the internal walkway was another large leafy piece over looking the courtyard, of which itself is a year round beautiful space of ivy covered limestone walls below a floating pine roofless pergola.

The work of Loose Leaf Studio is to “explore the connections between people and nature… to encourage an interaction and participation, blurring the line between art and the viewer”, and with Heide II being a building which blurs the line of natural and man made, inside and outside, I feel that no better space could have been chosen to hold the aptly named ‘En Route’. 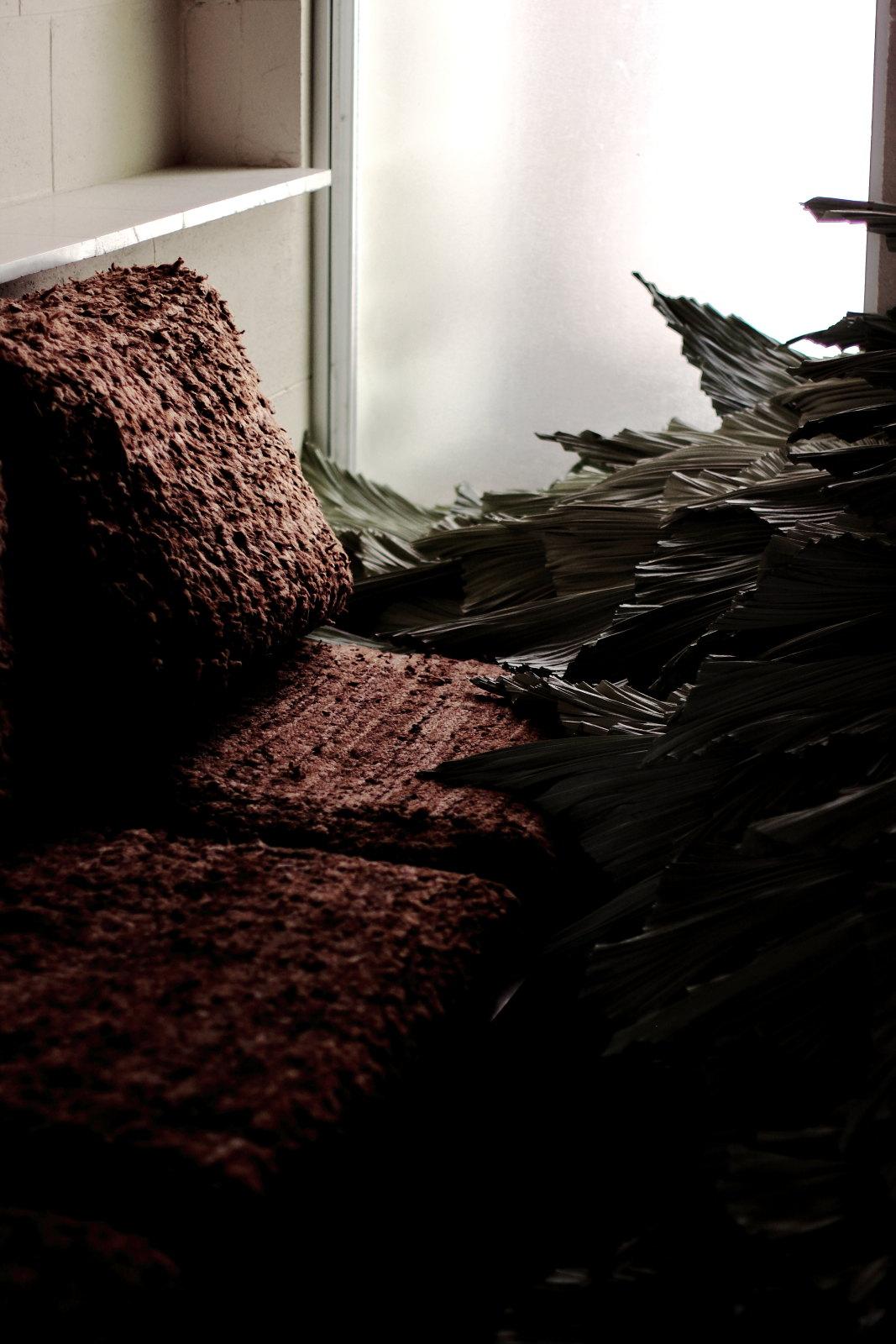